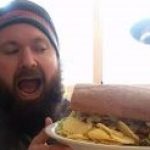 Justin joins the KXDD Morning Show via Minnesota aka the Florida of Canada.  He’s been doing radio for way too long but, truthfully, it’s all he’s ever wanted to do.  That’s right- when the other kids said they wanted to become astronauts, firefighters, pro ball players or doctors, Justin told the world he wanted to be a DJ…and to his mother’s disappointment he’s living his childhood dream.
Justin is passionate about pizza, football, his family and country music (in no particular order).
He aspires to one day have a sandwich named after him. (aim high)
When he’s not on the air you’ll find him with his family outdoors on the hiking trail, ski slopes or brewery patio.
And if you listen closely…very closely…every once in a great while you’ll hear an “oofta”.
Email Me
Find Me on FB
Find Me on Twitter